No Clip is a new blog series. An experiment in player interaction, I dig out old games and play them with a set of critical restrictions to rethink what we thought we knew. A repost of my first edition, lost in the New Destructoid revert, with a second edition to follow in the upcoming week.

To most gamers, Niko Bellic is a typhoon of destruction. The name is synonymous with exaggerated violence, brazen criminal acts, and a gruff Eastern European accent all wrapped up in a smoldering tale of vengeance. The protagonist for the critically acclaimed Grand Theft Auto IV, Niko is the lightning rod for Rockstar’s tale of embellished crime and desperation in their loving recreation of a real life New York City.

Following the series typical arch for their characters, Niko begins as a small time nobody and climbs his way over dead gang bosses to an inevitable spot at the top. This is the way of the Grand Theft Auto series. But I recall feeling something different about this fourth installation during my original playthrough. Niko didn’t seem like the usual crime-infatuated character. Rockstar painted him with some depth and a bit more character than previous incarnations, filling his background with vague worn-torn tragedies and consuming his present day decisions with a struggle to preserve himself from these same past mistakes.

This slight moral compass made Niko a tragic character to me. I felt rather plagued with guilt as I guided him away from his convictions and back into the life of a petty thief and mobster. I felt responsible for Niko falling off the wagon and I wondered how things could have played out differently. What if Niko Bellic refused to kill ? What if he really did try and keep his head above water and his hands clean ? Could Niko really have any other life but one of a criminal ?

I knew going into this idea that the only way to keep Niko completely law-abiding was to never turn the game on the first place. The narrative leads down a rather inevitable path. The only mission in the story arch that doesn’t involve some sort of criminal act is driving your drunk cousin back to his apartment after disembarking the cargo ship at the very start. Heck, even that’s only true if you respect traffic lights and restrain yourself from slamming into every car you see. With Roman soon in debt to loan sharks, I knew Niko’s ethics would have to be a little flexible. But I held true to one principle : In my game, Niko would never take a life.

That first car ride home was a major test of patience. Holding true to even simple traffic laws was inexplicably painful at first. Waiting for stoplights was pulling teeth. But I respected traffic laws to the best of my ability. After countless hours in single player and free roam with the accelerator to the floor at all times, driving slow was like trying to tell myself not to chew my own nails. I kept catching myself falling back into old habits. Red lights, stop signs, speed limits, the fact that I can’t ramp over cars if they happen to be in my way.

It was hard to think this way. But forcing myself into this compulsory reality brought something with it. A slow realization that Rockstar’s game wasn’t just a set of buildings in which to have your explosions, but a living, breathing city. Walking the streets, I heard near hours of conversation, insults, and quips from the civilians walking the streets that I’d never heard. Things I certainly would have missed careening down streets and top speed and shooting back at cops in pursuit behind me. I saw billboards I never knew existed, buildings I had no idea I could enter. I watched a man on a bench flip through the fully rendered pages of an actual book, a store owner meticulously clean a sidwalk, and watched a police officer place someone in the back of his cruiser after an elaborate foot pursuit.

It didn’t take long before the simple act of parking my car like a normal human being or calling a cab rather than stealing some poor guy’s beat-up sedan stopped being a nuisance. It started becoming a normal, even enjoyable, routine. After a few in-game hours in Liberty City, I started to take pleasure in the slow-paced walks to my cousin’s cab depot. Even more so, rewriting the pace of the game like this made every deviation so much more interesting. When you spend your time waiting impatiently behind a bus to take a right on red, a car chase through the city became a riveting switch-up. Rather than par-for-the-course, every infraction, no matter how slight, becomes a thrilling crescendo moment.

This made the missions themselves nerve-wracking experiences. I knew I had to carefully tread through the early missions of the campaign because my cousin needed my help. Nice or not, it wasn’t in Niko’s design to just leave Roman hanging. But I didn’t really know when it was one of the nefarious characters I began working for were going to ask me to take a gun and fall back on old habits.

At first, it was small things. Though I took no pleasure in smashing the window of a china shop, it didn’t require me to hurt the owner. So I did so to help my cousin. When some ‘debt-collectors’ jumped him in a basketball court, I beat the ever-loving piss out of them. Niko could handle himself. But as I justified each mission, I kept allowing myself to step further and further from my design. If I let myself smash a car window for protection money, how long before I’m smashing teeth ?

This ethical conflict came to a head when I took off in pursuit of Roman’s debt-collector at the tail end of the mission, leading a white-knuckled chase through Bohan’s industrial district. Caught up in the usual adrenaline-fueled sequences, I let myself forget what I was doing for a moment. I blew through lights and took corners sharply, nearly running down a few pedestrians. Eventually, I found myself spamming the A button in a dead sprint, intent on catching up to this sleazy loan shark as I chased him into the second story of an abandoned warehouse.

It was easy to disarm him. I’d become quite impeccable at the hand-to-hand combat as I’d previously worked towards the Finish Him achievement. But I didn’t even see what I was doing as I caught him in a combo maneuver. I was too focused on the timing of the disarm. The kinetic force of the mission’s pace had put me right back into the mindset of victory, regardless of the conditions. I nearly didn’t catch myself as I pulled the knife from The Albanian’s hands and readied it for a finishing move. I stood for a moment, paused as the clumsy gangster struggled back to his feet. I frantically unequipped the knife as he stood and instead knocked the son of a bitch out with nothing more than a solid kick to the gut.

Stepping out onto the scaffolding, The Albanian lay bloodied behind me, but he was still breathing. The mission was over, the loan shark thoroughly defeated. But I was amazed at how efficiently Rockstar had pulled me from my original intentions. I had made a multitude of compromises just to make it only a few missions into the story. I hadn’t killed anyone yet, but with nothing more than a flimsy car chase premise and an object marker on my radar, I’d nearly taken a life without thinking twice. It didn’t’ feel far off from the realizations in Shadow of the Colossus, a game which drove your character to brutally destroy gorgeous lumbering creatures as you followed obediently to nothing more than a glint of light on your sword.

I attempted a mission or two beyond that, but I didn’t get far. After the game had taught me how to fight, it was only a matter of time before it passed me a pistol and asked me to take out a few gangsters. After the incident in the warehouse, I was done with the game’s attempts to breach my ethical code. Vlad was satisfied enough with the work I’d done so far and I’d dealt with the majority of Roman’s debt-collectors. So, with a level of restraint the game didn’t seem to want me to have, I turned my phone to silent and refused all subsequent missions. Instead, I did the only thing I could do ; worked my day job and kept my head down. 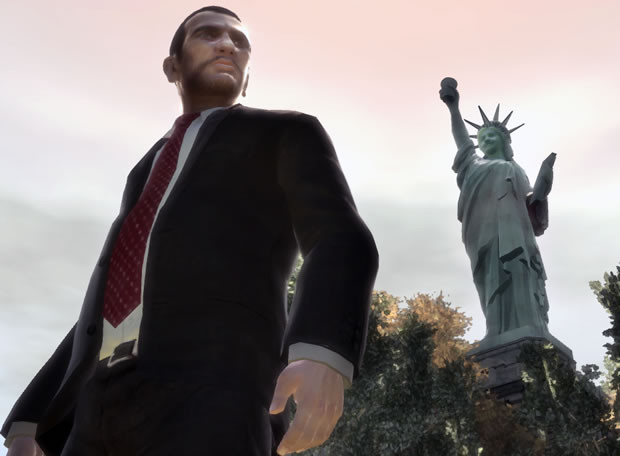 Niko became an average Joe, running a life that became not unlike playing a stripped down version of The Sims. I woke up in the morning and went to work taking cab fares around the city for my cousin. I outfitted the gruff, intense, brooding ex-mobster in the most unassuming outfit possible, complete with a pair of scholarly glasses. I went on dates with Michelle, which became progressively more hilarious since I was no longer worthy of her under-cover investigation. The most interesting thing to report on my Mr. Bellic was how deft of a bowler he’d become.

After numerous hours plodding around the city in my cousin’s taxi, occasionally going out for drinks with Roman, watching television, or nailing the high score in CUB3D, I unceremoniously ended my game. Without a storyline cut scene to cap it, I was forced to apply my own victory conditions. I’d made a fair sum of money from working a successful job and not bleeding cash in hospital bills and gun stores. Had the game left in some of the previous games’ intricacy of buying property, I could’ve bought Niko a decent apartment, or maybe invested in crummy night club to turn a profit.

But, sans any real assets, my version of Niko was otherwise victorious. He was a part of Liberty City. Bulgarin would never find him. He was able to manage a day job. The police never became acquainted with his ruthless prowess with a handgun and he scarcely put a dent in his cousin’s taxi. The citizens of Liberty City were sparred a vicious spree of crime and destruction. No one detonated buses in the center of Times Square and no helicopters were shot out of the air over busy downtown Alderney.

Grand Theft Auto IV had no achievement to award me for this victory, no gamerscore came from being an unassuming citizen. But in my story, Niko stuck to his moral compass and managed to flee his criminal past. His cousin kept his cab depot and no one shot his friends. It wasn’t in the design to progress this way and it constantly tried to buck me from my new goal. But, despite everything, it is nonetheless unreservedly possible for Niko Bellic to just be a nice guy.

Red Dead Redemption, the end of the West